Dagmar, –1212, Valdemar Sejr's first queen, was a daughter of king Premysl Ottokar I of Bohemia and Adela of Meissen. Ottokar had been living in ab. 20 years of marriage to Adela, when he under the pretext of too close kinship applied for divorce (ab. 1198) and married Constantia of Hungary. Adela went with her children, 1 son and 3 daughters to her homeland and applied in vain during many years via help from the Pope to regain her rights; she died in a kloster, which she had established in Meissen 1211. One of the daughters became an abbess and was after her death considered a saint, another got married in Bavaria. The third daughter, Dagmar, was brought to Denmark as king Valdemar's bride in 1205. Her mother's hard fate had probably early matured Dagmar and developed the best sides of her character; as queen of Denmark she won the Danish people's love and affection, and she was described in contemporary poetry as the paragon of a faithful wife and humble Christian and as the princess, who always wanted to ease the life of the suffering. The Danes gave her a name which bears witness of this. Her church name was Margareta/Margrethe , the other was a Slavic name Dragomir/Drahomir (meaning peace-loving) was by the Danes changed into Dagmar - like Vladimir became Valdemar - among people her name was interpreted as Dagens Mø (Dag-Maar).(a beautiful lady).

Historical sources know little about her, but they know like the folksongs that she influenced king Valdemar to free his relative, bishop Valdemar, who had been Valdemar's prisoner for 13 years. In 1209 she gave birth to the son Valdemar. After only 7 years of marriage she died 24. May 1212. A beautiful folksong was written and sung by people about her illness and Valdemar's long ride to come to her deathbed. The folksong says that when Valdemar kneeled at her bier, she woke up and told him about her last pious wishes and about her gnawing self-reproach , because she had sinned "on Sundays I have laced up my sleeves". Dagmar's grave is in Ringsted kirke (St. Bendts) beside Valdemar's; when it was opened in 1855, it was empty.

Berengaria, –1221, Valdemar Sejr's second queen, was the youngest daughter of king Sancho I of Portugal and queen Aldonca. When her mother died in 1198 after 24 years of marriage and after having given birth to 11 children, B. was probably born after 1192. After the mother's death B. was brought up by her eldest sister who had been married to king Alfonso of Leon. The Portuguese chronicles assume that she died unmarried , but maybe she during the sisters' feud with their eldest brother king Alfonso I of Portugal, went to her younger brother, Ferdinand, who via his marriage to (Jeanne de Flandre) had become a count of Flandern, and from there she could easily be known in Denmark.

In 1214 she was married to king Valdemar. She became the mother of 3 kings, but died already 27. March 1221, leaving a reputation about a great beauty, but also about arrogance and strictness, especially against the peasantry. This rumour was taken up by the folk poetry and used freely, since the folk songs changed her name into "Bengjærd" which was not flattering. When her grave was opened in 1855, her bone structure confirmed the rumour about her beauty; but some trouble around the grave after her death also indicated the hatred against her. None of her sons named their daughters after her. 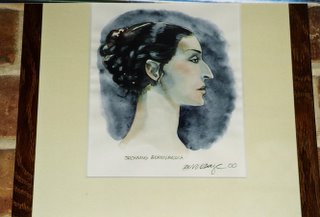 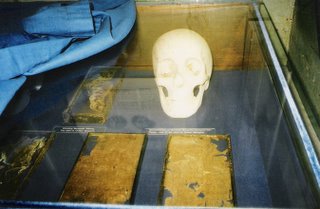 When queen Berengaria's grave was opened in 1885, they found her thick plait of hair, her finely formed skull and finely built body bones. A portrait drawing was made to show how she might have looked. Berengaria was a daughter of king Sancho I of Portugal and queen Aldonca and a descendant of Robert Capet. She was married on May 3rd 1214 to king Valdemar II Sejr of Denmark. She became the mother of three kings, but she died already on March 27th 1221 and was buried in Sankt Bendts Church in Ringsted, the burial place for the early Danish kings and queens.

Eleonora of Portugal, Berengaria's niece, was a daughter of Berengaria's brother, king Alfonso II el Pancudo and Urraca of Castile, she was married in 1231 to Valdemar the Young, Valdemar's son with his first queen, Dagmar of Bohemia. Eleonora was born in 1211 and died in childbirth August 28th 1231, her child died the same year. Valdemar the Young was killed by an accidental shot at Refsnæs November 28th 1231. Buried in Ringsted with Eleonora.

-------------------------------------------------------------------------------------------------
Helene Guttormsdatter, 1172-1211, the wife of Esbern Snare, was a daughter of the Swedish earl Guttorm, who once fetched king Carl Sverkersons bride in Denmark and on the same occassion was godfather of Valdemar I den Stores son Knud (1163). Helene was probably named after the Holy Helene of Skøfde, a celebrated saint , who was canonized in 1164 and wellknown in the folklore of northern Sjælland. When Esbern Snare lost his second wife Ingeborg he - although not quite young anymore - married the young beautiful Helene. In this marriage was born the daughter Ingeborg af Kalundborg and maybe more children. Soon after Esberns death in 1204 Helene became Valdemar II Sejr's frille (mistress) and had the son Knud. But in 1205 Valdemar married Dagmar of Bohemia , and his relationship to Helene supposedly stopped - it seems that Helene left Denmark. She died in Roskilde ab. 1211, but she was not buried in Sorø like Esberns other wives , and from diplomas from the 14th century it appears that she established 'Vor Frue Kapel' at Linköbing Cathedral, where she probably chose her burial place. (NB: She died in 1211 39 years old, and was buried in Vreta Kloster). Her gifts to the church were later increased by her son's son Svantopolk Knudsen and his family.

Valdemar II Sejr honoured his and Helene's son Knud by making him a hertug, ( Knud of Blekinge) , and he gave him his own property in Sweden. Helene left him a considerable inheritage there too. Knud was married to Hedvig, a daughter of duke Svantepolk in Poland. They had the before mentioned son Svantopolk, who was married to Benedicta, a granddaughter of king Sverker 2. of Sweden and Ingegerd, and two daughters, Elisabeth, married to duke Erik of Halland, and Cæcilie, married to Philip (Folkunge).

Wulfnoth was the grandfather of king Harold II of England, Gytha Thorgilsdatter was a great granddaughter of Harald Bluetooth, Judith of Flandern descended from the dukes of Normandy and Rollo, and Skule's wife Gudrun Nevsteinsdatter descended from Harald Hårfager in Norway, so Helene's ancestors were a part of the big genealogical wickerwork with connections to the old Danish and Norwegian Royalty and to Anglo-Saxon England and the Normans in France.